What is Employment Discrimination in Chillicothe?

Employment discrimination can be unlawful under both Ohio state and federal law. According to Section 411.02 of the Ohio Revised Code, it is an unlawful discriminatory practice for an employer to discriminate against an employee, independent contractor, or prospective hire because of their race, color, religion, sex, military status, national origin, disability, age, or ancestry. This could include refusing to hire someone, giving them a negative performance review, cutting their pay, firing them, or a number of other adverse employment actions.

As you can see, there is a general law in Ohio that prohibits various forms of discrimination in the workplace. Under federal law, there are several specific laws that prohibit different types of workplace discrimination, including but not limited to the following:

Our firm handles many different types of discrimination claims, such as:

Common Examples of Discrimination in Chillicothe

If you have questions about filing an employment discrimination claim, you should seek advice from one of the Chillicothe discrimination lawyers at our firm. We represent employees in Ohio and are committed to advocating for fair workplaces. Contact Marshall Forman & Schlein today for more information about identifying discrimination and filing a claim in Ohio. 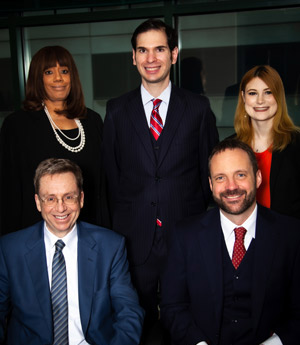 Let us take the stress out of your legal process. Our team is here to help you.

Do You Have a Question?

Write Us a Message

I got fantastic help from Maddie Rettig. I wish I could explain how great she was.

Would highly recommend Maddie Rettig! Very knowledgeable of all laws and regulations. She kept me informed every step of the way and was very transparent about what was going on. Very pleased customer and would refer anyone I know who needs legal counsel to Maddie!

John Marshall is a very skilled and competent attorney. I am very thankful for his professionalism, knowledge and guidance in dealing with a very difficult situation. John Marshall is someone I would highly recommend for any employment and civil rights needs.

I know, I put 5 stars on everything regarding Edward's evaluation and it seems unrealistic, but, believe me!- when you don't know whom to turn to, who can help you, and being pushed around from one attorney to another,- it is extremely satisfying to just get a moment of a…

Sam was my lawyer in a case where my employer harassed me and violated my FMLA rights. I recommend Sam because of course I won the case and got everything I wanted, but most importantly Sam will fight for you. He treated me with the highest level of respect. Sam…

Helen was excellent to work my case. She understood the circumstances and was very patient. She always kept me up to date on everything. I highly recommend her to anyone who has a similar case. Marshall Forman & Schlein LLC helped me get through a very tough situation. Very professional…

Sam is very experienced and worked tirelessly to ensure the best possible outcome on my behalf. He kept me updated every step of the way and is very kind. He gives you accurate information without sugarcoating anything. He is the best! Thanks sam

The amazing work and commitment that is this law firm.

John really did a great job listening to what my needs were and offered a variety of solutions. I have no doubt he will do that for you too.

Attorney Advertising. This information is designed for general information only. The information presented should not be construed to be formal legal advice nor the formation of a lawyer/client relationship. Past results and testimonials are not a guarantee, warranty, or prediction of the outcome of your case, and should not be construed as such. Past results cannot guarantee future performance. Any result in a single case is not meant to create an expectation of similar results in future matters because each case involves many different factors, therefore, results will differ on a case-by-case basis. By providing certain contact information herein, you are expressly authorizing the recipient of this message to contact you via the methods of communication provided.